ION unveiled the iDISCOVER KEYBOARD at the Consumer Electronics Show at the Las Vegas Convention Center. According to a press release “The iDISCOVER keyboard transforms your iPhone or iPod touch into a music creation studio. Virtually anyone can use it to easily create music [editor note: the same way, anyone with a hammer is a carpenter, your mileage may very.] . 25 piano-style keys and a custom sound app that includes more than two dozen world-class sounds give you everything you need to learn and create music with your iPhone or iPod touch.”

“iDISCOVER KEYBOARD consists of a 25-key, battery-powered piano keyboard workstation with dock and a custom iDISCOVER KEYBOARD app for iPhone and iPod Touch. iDISCOVER KEYBOARD gives users velocity-sensitive, synth-action keys, pitch and modulation wheels, and physical buttons for the most commonly used controls including octave up and down and sound-bank selections. It features stereo RCA outputs and a headphone jack for connection to playback and recording systems. iDISCOVER KEYBOARD also has a USB/MIDI output so musicians can use it as a controller for MIDI software on Mac.”

ION also demoed a product called iType (pictured below) which was a regular keyboard for the iPhone, but has since removed it from their product lineup. 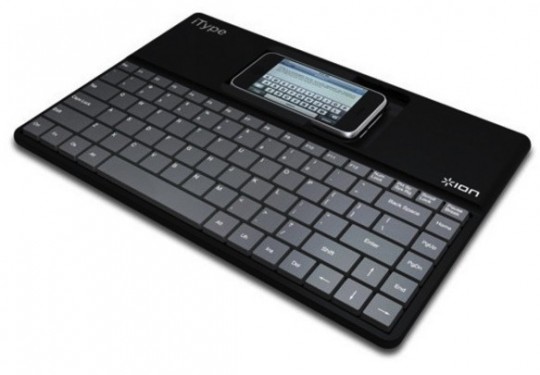